Ocean turbulence on an Aqua-planet

The dynamics of Aqua-planets

Aqua-planets are Earth-like planets with an atmosphere and ocean like our own, but with highly schematized land distributions. They provide a context for the study of:

In our aqua-planet studies the geometrical constraints on ocean circulation and extent of land are reduced to a minimal description: a sequence of ‘stick models’. The ‘sticks’ are narrow vertical barriers in an otherwise flat-bottomed ocean, which extend from the bottom of the ocean to the top: there is no orographic forcing of the atmosphere.

The sequence from Aqua to Ridge to Drake to Double Drake can be regarded as a ‘cartoon’ that increases the level of geometrical complexity: from the pure Aquaplanet (where there are no topographic constraints on ocean circulation) to the Double Drake (in which two barriers arcing down from the north pole delineate a small basin and a large basin, with an unblocked circumpolar region over the south pole). The Double Drake captures the two essential aspects of basin geometry of our present world: inter-hemispheric asymmetries (zonally blocked flow in the north, unblocked in the south) and zonal asymmetries (a small basin and a large basin).

Study of this system has enabled to probe:

Multiple equilibria on an Aqua-planet 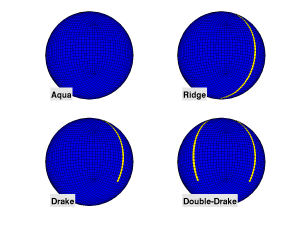 Land is marked in yellow, ocean in blue.

Life on an aquaplanet