Loss of Sea Ice in the Artic

Assessment of Undiscovered Oil and Gas in the Arctic

Interaction of Ocean and Ice

The Arctic ocean, an ice-covered sea, may be particularly vulnerable in a warming world, and its thawing could have global consequences. Indeed, Arctic sea ice has seen a dramatic decline in its seasonal minimum extent over the last three decades. Satellites have also documented unexpected and unprecedented accelerations of ice flow and mass loss from the Antarctic ice sheets near the marine margin. Processes governing changes in ice sheets have major implications for sea level rise since they dwarf other drivers but remain major unknowns in sea level rise projections. Simple theory suggests that marine-based ice sheets, such as the West Antarctic Ice Sheet with a sea level equivalent of three to five meters, may be inherently unstable.

Life in the Polar Oceans

The polar oceans contain a significant fraction of the planet’s biomass as well as some of the most productive ecosystems—ecosystems filled with vast shoals of fish and plankton, which provide food for many species of marine mammal and for humanity. The warming of the Arctic has already had an impact on the feeding areas and migration routes of many ecologically and economically important fish species, typically increasing the journey to spawning grounds. Because such changes are occurring extremely rapidly, it is essential to make comprehensive observations and develop accurate models to help predict the fate of these vital ecosystems—and help conserve them.

Resource Exploration in the Polar Oceans

As the Arctic thaws, major expansions of resource exploration and extraction activities are being planned. There is thus an urgent need to understand ice mechanics and processes on the scale of engineering applications in order to design safe systems that will not harm the environment or marine life. Finally, a seasonally ice-free Northwest and Northeast Passage may open up new shipping routes connecting North Atlantic ports with those in Asia, reducing travel time by a third. There is likely to be increasing access to resources over the pole in the coming decades and, given the associated sovereignty issues, the Arctic may again become a major national security concern. 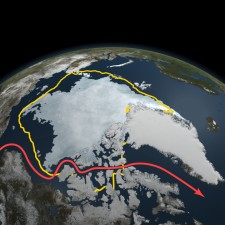 Find Out Who's Involved

More on this topic at